David's interest in engineering started at an early age. After finishing an apprenticeship at Rolls Royce Filton, Bristol he then specialised in research and development on military aircraft. He began rallying in 1982 in a TR8 progressing from road rallies to becoming a tarmac stage specialist.

Rather than being just a hobby he decided that he would like to work in the motorsport industry and took a position at Austin Rover working as Tony Pond's technician on the World Rally Championship with the Metro 6R4. When the cars were banned in 1987 David decided to use his knowledge of the 6R4 by setting up his own company as a specialist.

He built many cars and even redesigned the 6R4 with his own DAM 4100 version.

After 15 years of being "Mr 6R4" he sold the 6R4 business and moved to Devon. After taking some time out with the family, he decided to try his hand at property development and enjoyed a slower pace of life.

David's contacts within the motorsport industry led him to Prodrive, and a move into the more modern WRC Subaru. Starting with an S8 he progressed to a S9 & S10 which he rallied although only a few times a year, still with great success.

“ These stunning cars are built as exact copies of the last works cars with brand new engines, gearboxes, axles amongst nearly every part having to been reverse engineered, manufactured and fitted to the immaculate bodyshells. The cars are FIA papered and available for purchase. We can also support these cars on event with our team of experienced personnel. 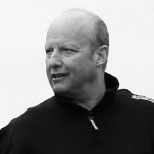